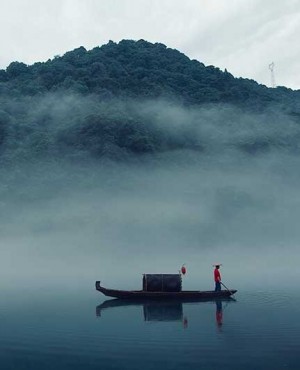 Guizhou – A rich culture with no traditional written language flourished throughout the years in the provinces of Guizhou and Hunan. Who exactly are these people? They are the Dong indigenous group, also known as Kam.

This ethnic group is one of the fifty-five officially recognized minorities in China. Their ancestors are thought to have migrated from Africa about 4,000 years ago. They are culturally diverse, with distinct subgroups scattered throughout the provinces of Guizhou and Hunan, as well as parts of the Guangxi Zhuang Autonomous Region.

The Dong people used to live in the mountainous regions. Their houses are built on stilts. Their food consists mainly of rice, pork, and eggs. Dong minority also cultivate rice and feed their livestock. The men hunt and fish for a living and grow fruit trees such as peach, plum, and pear. Dong people use traditional agricultural tools such as the hoe, spade, and weeding rod to clean up weeds from their crops.

There is no doubt that Dong culture has been shaped by nature, but it has also been molded by its neighbors over many centuries. The people have their distinct cultural features that established their community’s ethnic history with colorful and intricate traditions, beliefs, and values passed down through generations.

The Dong people are also keen on various arts and crafts. For instance, they are fond of weaving baskets, hats, and even mats. They also have a knack for traditional jewelry making. However, the two main customs associated with this indigenous group are their multi-marking practice and agriculture ceremonies.

As nature is a big part of people’s lives, they have passed on the tradition of multi-marking various significant locations in their village. The Dong members gather grass or other plants and knot them with a tie before placing them on different areas to serve as signs and marks. Most of these markings signify love or serve as warnings. In some cases, it may even be a sign of disdain towards another.

It’s not all about customs, though, as the Dong also has a distinct belief. In particular, on the second day of the second Lunar month, the people try to appease the dragon that they believe raises its head from the water. According to the folktale, this dragon brings either good or bad luck to the people. So, to secure good luck, families serve delicious meat, fish, egg, and rice cake to the deity of agriculture who is said to live under a bridge. Families picnic on the bridge with the expectation of appeasing the dragon and bringing a good harvest for the next season.

Despite such importance given to a rich historical treasure, the Dong ancestral legends differ based on the tales shared within their respective communities. The indigenous people not only differ in their retelling of folktales but also in their use of language.

According to the various studies of linguists, the Dong people speak a form of a Kam-Sui language (closely related to the Tai language). However, despite being a small community, their people speak various dialects that are incomprehensible to each other. Two main categories of these dialects are the northern and southern languages.

Language is one essential key in any indigenous group’s cultural identity. Having variations in almost every local community explains a lot about the structure of the language. For the Dong people, their spoken language is phonetically similar to the Tai/Dai language. However, the people do not have a written language traditionally. With such a setup, the language dialects diverge massively throughout the region.

This situation makes it extra challenging to plan for the proper preservation and conservation of this ethnic language. Nevertheless, it does not end the hopeful take of the minority to keep the language alive. For instance, in 1958, researchers attempted to form a written language using an orthography based on the Latin alphabet. Sadly, this project did not gain traction within the communities. Presently, the younger generation is looking at the necessity of education in maintaining their people’s cultural identity. One step towards such is through recording their people’s language through a written form. This was inspired by the practices in history that show that spoken-only languages die out, but written ones have a greater potential of survival.