Home / News / The Reawakening of the Rapa Nui People

The Reawakening of the Rapa Nui People 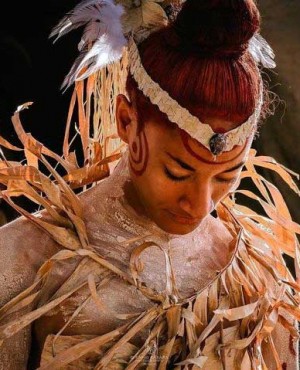 Santiago – The gigantic awe-inspiring stone heads left by the seafaring civilization called Rapa Nui attract thousands of travelers to a tiny island called Easter Island in the mid-Pacific. Although isolated, Easter Island was discovered by the brave people from the Marquesas Islands in Polynesia more than 1,000 years ago. Over the last few decades, archaeologists have tried to decipher the mystery of the island’s original inhabitants. Who are the Rapa Nui and what happened to their once large and thriving society? Despite the lack of historical records, newly discovered evidence gives us further insights into these aboriginal Polynesians.

Easter Island, also named Isla de Pascua in Spanish and called Rapa Nui by its inhabitants, is a small volcanic island located in the South Pacific Ocean. The name “Easter Island” originated from the European explorer Jacob Roggeveen, who chanced upon the island in 1722 on Easter Sunday. Annexed by Chile in 1888, Easter Island lies more than 2,000 miles away from Santiago de Chile, Chile’s capital. It boasts a picturesque landscape and mysterious stone statues called moais carved between the 13th and 17th centuries by its indigenous community, the Rapa Nui. According to the native tradition, a group of Polynesians led by King Hotu Matu’a traveled thousands of miles using a hulled-out canoe. Upon settling in the island, the settlers began to develop their own beliefs of methods and protection, eventually giving rise to the moais.

The rich culture of the Rapa Nui people is evident in the 1,000 monolithic statues spread across the islands. Made from hardened volcanic ash called scoria, the moais stand a few feet to about 80 feet high and weigh roughly 14 tons. Most of these statues are placed on top of a large stone foundation called ahu, according to the accounts of Norwegian explorer and anthropologist Thor Heyerdahl who visited the island in the 1950s. The moais are believed to represent the ancestors of the island. When someone in the family passes away, a moai is built and placed on top of the ahu. Today, the moais are situated close to the coast and face inland. Many of them can be found in the volcanic crater of Rano Raraku, the main quarry where most of the moai were carved.

Easter Island’s current population is 5,700, nearly half of whom identifies as descendants of the native Rapa Nui. The main community is located at the Great Bay or Hanga Roa and speak both Spanish and Rapa Nui languages. The Rapa Nui language is similar to other Polynesian languages, especially Tahitian and Hawaiian, with ancient roots in Southeast Asia. The influence of Spanish, Chile’s native language, came when parents tried teaching their children, consequently putting aside their own native language. In the hopes of preventing the Rapa Nui language from becoming extinct, efforts are underway to help newer generations learn and continue using the language. This prompted to a decree in 1975 mandating Rapa Nui language to be taught in schools. Luckily, the people have become bilinguals, easily switching between Spanish and Rapa Nui.