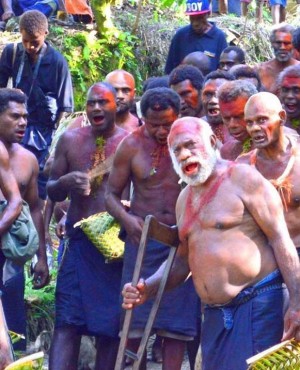 Port Moresby – Among the various destinations in Papua New Guinea, Rabaul has a unique charm, with its pristine natural beauty amidst multiple active and extinct volcanoes. It’s no wonder this region is a famous tourist attraction. More importantly, Rabaul is home to the Tolai people.

The Tolai are the indigenous people of Rabaul, who are known to be close kin to the people of New Ireland. It is believed that the Tolai migrated to the region where they established their community with a colorful set of traditions, culture, and beliefs.

They formed their communities and sustained their families through the successful production of cocoa, copra, and vanilla in the fertile land. However, it was not an easy path as the Blanche Bay area is surrounded by volcanoes. Recent eruptions have affected the various indigenous homes, but they did not stop the people from living in the region in the past decades. The Blanche Bay area itself is a crater of a massive ancient volcano.

The Tolai people are best known for their strong and powerful male secret societies known as Duk-Duk. Members of this group acted as judge, jury, and executioner while possessed by spirits. It is interesting to note that only men are allowed to watch and participate in the practice of Duk-Duk. Such intricate rituals and ceremonies are exclusively passed on to the members throughout the years.

Aside from this, their strength is also a proud attribute of the Tolai. It is believed that their communities’ location is originally home to non-Austronesian-speaking groups, such as the Baining, Taulil, and Sulka. This is a part of the Tolai’s history that they have claimed to be an important aspect in their continuous community life.

Moreover, the people’s migration to the island is reflected in the distinct language that the people use. The Tolai refer to their language as tinata tuna, which means “true word” or “proper word.” It is an Austronesian language that is closely related to southern New Ireland. Nowadays, the language is referred to as Kuanua or simply Tolai. Even with this native language, people speak two other languages as their first language: Lungalunga and Bilur.

As Papua New Guinea banks on its natural riches and various tourist destinations, cultural attractions have also been ideal for getting tourists to visit the region. Thus, throughout the decades, the Tolai have gradually opened themselves to such possibilities. However, the two significant aspects of their culture that they are still hesitant or more cautious of sharing are their Duk-Duk and tubuan practices.

The tubuan is their people’s masked ritual figure, which the Tolai consider a prime symbol of their traditional culture throughout their struggle with European colonizers. They eventually learned to incorporate this practice in the community’s lotu (church) events, matanitu (government) functions, and bisnis (business) such as tourism.

The Tolai take pride in their masks and their secret community of powerful men. Their belief is connected to the various rituals observed in each one.

Perhaps it may take a while to achieve a good balance between the Tolai’s traditional practices and modern needs. However, this is still a good opportunity for the indigenous people to flourish. They can continue and pass their history, culture, and traditions to younger members of the community while opening up to the world.