Traditional Living of the Kanak People 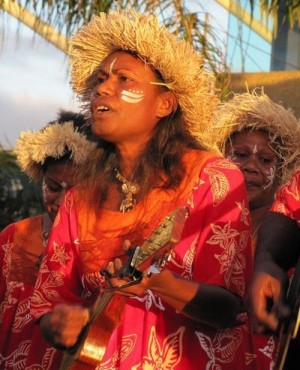 Nouméa – A visit to New Caledonia becomes even more fruitful when one immerses in the vibrant local culture of the Kanak ethnic people. Witness the beauty of their communal life in the village and understand the history, lifestyle, and the principles behind their strong bond.

The Kanak ethnic group is the largest indigenous population in New Caledonia. Their name is thought to be derived from the Hawaiian term kanake maoli, which means “true people.” However, it is also thought that the name Kanak is derived from the French word canaque. It is a term that was used by early Europeans who have gone to Polynesia. However, many Kanaks found this to be an insult as it is related to the name Kanakas, which refers to the people of the South Pacific who were abducted by slave traders in the 19th century. Thus, the Kanaks prefer the Hawaiian origin of their name.

Kanak society revolves around the organization of clans, locally known as tribus. This structure is primarily based on their ancestry. However, this organization is not static. It may change depending on how people’s relationships evolve: disputes, migration, and even switching clans by their own choice. There is a more complex setup within the clan’s hierarchy and its possible integration with a bigger one. Many believe that this kind of practice was influenced by Polynesian royalty, which was brought over by Polynesian immigrants.

In the Kanak society, people’s interactions do not merely end with clan distinctions. People also interact differently based on their work designation and age. This kind of engagement is the Kanaks’ way of showing respect to their members, especially the elder ones. Aside from these, the structure of their society also gives a clear distinction between male and female roles.

However, many Kanaks have abandoned their traditional way of life throughout the years. The changes in the different communities in New Caledonia brought this kind of movement. Young members eventually went to search for education and jobs in urban areas, which is a practice beyond their cultural customs. Yet, even with such changes, the Kanaks do their best to maintain a connection with their clans.

Part of the Kanak identity is their la coutume (“custom”), which is a prescribed way of life that includes everything from social interactions to rituals. Within the la coutume are the proper ways to keep a connection with their ancestors and their indigenous culture. However, as more changes happen in the society, modern beliefs and customs clash with the traditional la coutume. For instance, it is a common practice to give gifts as a sign of respect and also a way to build a good network of mutual obligations. These engagements are usually in line with discussing important events, such as a festival or a marriage.

As numerous languages depend on regional usage, many of these Kanak languages are at risk of disappearing, especially with fewer younger members using them to communicate. An example of these are the Pwapwâ (Voh region) and Siche (Bourail/Moindou) languages, which are now spoken by only a few dozen speakers. Another concern is that Kanak languages are only optional subjects in school, so the responsibility of keeping them alive lies with the local clans and the elder members. Nonetheless, there is some attempt to promote and develop the Kanak languages with the founding of the Kanak Language Academy in 2007.

As the coming years bring continuous changes in New Caledonia society, it is hoped that the Kanak culture, history, and language are preserved. It is a responsibility that must be understood, accepted, and acted upon by both the elders and the younger members of this indigenous group.