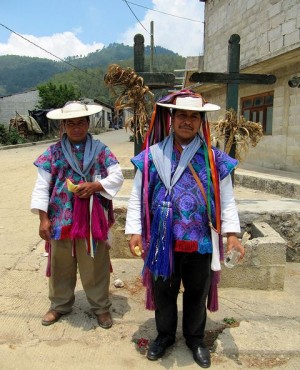 Mexico – The Tzotzil people live in the highlands of Chiapas State in Mexico. Their community appears to be just like the other communities in the region, with their modest houses and the usual streets filled with stores selling various local items. Beyond that, however, the Tzotzil are indigenous residents who have their own culture and beliefs that may seem unique compared to that of their neighboring peoples.

Tracing the roots of the Tzotzil people, one will see that they’re connected to the Maya Indians. They are local residents who have their own language, religion, and even their own time zone.

Among their communities in the mountains, the people share a rich culture and tradition that are more than 2,000 years old. With the cool climate in the highlands, they live in an agricultural-based society, with beans, maize, and squash as their main crops. They are an independent group who have developed their own system of government, religious practices, and education. This independence helps keep their ethnic roots alive.

The Tzotzil people can easily be distinguished from other local residents of Mexico through their language, which is different from Spanish, the language used by the majority of Mexicans.

Within the Tzotzil language, there are five to six distinct dialects. Thus, some Tzotzil call themselves Sotz’leb, which also means “bat people” in their own dialect.

Some linguists even consider each dialect as an entire language on its own. However, a fascinating fact is that the Tzotzil can understand each other even when speaking different dialects.

Changes While Keeping It Real

Evidently, there have been changes in the lives of the Tzotzil people over time. Their daily life has changed, but they are doing their best to keep their identity as a community alive. One of the recent big changes is how the residents are leaving their traditional lands due to the influence of global trends, as well as the need for economic stability. Even though this shift is happening, it is good to know that there are still groups who wish to preserve their indigenous traditions, beliefs, and customs by incorporating them in the school curriculum. This helps connect the past to its younger members.

Through the years, the Tzotzil continue to include their culture in their daily routines. Students learn about their history and do not seem to have difficulty connecting to their past as they themselves are living among people who keep their ethnic culture alive. They continue to grow as a community with love for their roots. Young members are well acquainted with traditional dishes, dances, and practices.