Home / News / A View of the Cappadocian Ethnic Group

A View of the Cappadocian Ethnic Group 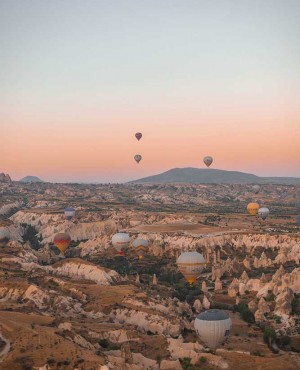 Ankara – The Cappadocian ethnic group or Cappadocian Greeks has an interesting history, indigenous culture, and present lives. The ancestors of the Cappadocia people are from Central Anatolia, a region in Turkey. The traditional Cappadocian communities then were scattered to different areas at the center of present-day Turkey, namely, Aksaray, Kayseri, Kırşehir, Malatya, Nevşehir, Niğde, and Sivas.

The history of the Cappadocian people dates far back to the 6th century BC when the ethnic group’s name became known to explorers. At the time, the Cappadocia was a kingdom, with its nobility influenced by the Persian satrapy and Zoroastrian religion. From the writings of the Cappadocian people themselves, it seems they were exposed to Christianity early. Their people’s name appears in the Bible, in Acts 2:9, as their language was named as one of the languages that the apostles spoke when the Holy Spirit made them speak in tongues.

Understanding the connection of the indigenous group to various cultures and belief systems is one of the ways to better view the people of the present. However, it is also important to look at the region where the communities are located to better understand the Cappadocian people’s beliefs, culture, and traditions.

The Cappadocian homes are located at the heart of Turkey where they are surrounded by the beautiful natural wonders of the area. The main communities are located over a high plateau with altitudes that reach volcanic peaks such as Mount Erciyes (also called Argaeus) near Kayseri. Such a unique location subjected the Cappadocian to a unique climate. The people live with hot and dry summers, as well as cold and snowy winters. Such geographic locations and climate conditions affected how they constructed their homes as well as their way of life.

The Cappadocian language is also known as Asia Minor Greek. However, bear in mind that the latter term is a general term used to identify various native Greek dialects of Asia Minor, not just Cappadocian. This ethnic language was thought to be extinct since the 1960s until some recent discoveries. In 2005, some Cappadocian Greeks located in central and northern Greece were found to still speak the ethnic language so that the language was declared alive. This is a good place to study and possibly revive the Cappadocian language. However, the native speakers are getting older by the day and may hinder such studies soon.

Cappadocia of the Present

Even though the ancient kingdom of Cappadocia is not the same and fewer people speak their ancestors’ language, the term Cappadocia is still very much alive. Cappadocia is now used to refer to the region that extends from Kayseri west to Aksaray. These are now tourist destinations that fascinate numerous visitors all year round.

The four cities Nevşehir, Kayseri, Aksaray, and Niğde are the most popular destinations. Each city showcases different monuments, rock-cut churches, and various traditional dwellings. Other famous attractions are the underground cities of Derinkuyu and Kaymaklı, as well as Göreme National Park.