Home / News / Beyond the Red Ochre of the Himba People

Beyond the Red Ochre of the Himba People 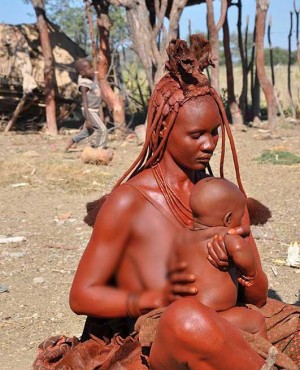 Windhoek – Under the heat of the African sun lies a community of people who have resisted change and preserved their distinct heritage. Their group lives in small, round wooden huts covered in cow dung, representing the long history of their community. These huts in small groups are unique to villages of the Himba indigenous group of Namibia. Within these villages are the people who proudly practice their traditional cultures, beliefs, and practices. One of these distinct practices is the wearing of red ochre, signifying various stages in the Himba peoples’ lives.

Who are the Himba people?

In the quest to understand indigenous people all over the world, it is an excellent step to start with their history. As for the Himba, it is believed that their people migrated along the Kunene River around the 16th and 17th centuries. During those times, they settled in what we know now as northwestern Namibia and southwestern Angola. This movement was brought by the need for water, which was essential to the community’s livelihood of grazing cattle. However, migration came as a critical practice to other Himba members throughout the years. According to studies, some of these different communities moved further south and became known as the Herero indigenous peoples.

The Himba and Herero share the Herero language, which is the OtjiHimba. Nonetheless, the Himba people have kept their ethnic practices and individuality in the Kunene region, formerly known as Kaokoland.

The Himba people’s settlements are within a fence that marks the land that the people may occupy for their small group. Within these boundaries, their small, round huts are visible. There may also be some other lower fences used for animals, as the people are known to be pastoralists who farm livestock such as cattle, sheep, and goats.

Inside the villages, the Himba families continue observing their traditions and beliefs. In the morning, the members of the community communicate with Mukuru, their god. They light a holy fire, known as Okuruwu, between the cattle enclosure (called kraal) and the chief’s hut. Through this practice, the people believe that they are sending smoke towards heaven, which offers the opportunity to communicate with their ancestors who are with Mukuru.

An important reminder for visitors is to observe proper respect for the practice. There is a sacred line within the area of the holy fire that is seen in every village. This line begins at the entrance of the chief’s hut, passes through the holy fire, and leads up to the cattle enclosure where it ends. People who are not invited into the village or any outsider is not allowed to cross this holy line.

As a person who may not be familiar with the Himba, seeing them wearing their unique red ochre cream may come as quite a surprise. But this red ochre paste is an essential physical characteristic of the people.

The red ochre cream provides protection from the scorching heat of the sun. The cream or paste is made from the pounding of ochre stone, also known as hematite, which is mixed with butter and some mud. When this paste is put on the people’s skin, it keeps their skin moist and clean. It even blocks hair growth.

The practice of wearing red ochre also establishes a difference between the Himba men and women, signifying life changes. Aside from putting the ochre paste on their skin, they also braid their hair and cover it with a mixture of butter and ochre. These braids are different per person. Initially, girls would have two braids. The number of braids increase when they get married and give birth, which may be of a different hairstyle known as the Erembe. This is a Himba crown made of cow or goat leather. As a girl reaches puberty, she may be able to wear this on her head. It is crucial, however, that these girls are mature enough to take care of themselves hygienically.

The meaning of the braid and use of red ochre is different for the men. Single men in the village will only have one braid. Once they get married, they are to tie their hair in the form of a turban.

Now we know that wearing red ochre isn’t just a form of physical adornment. It has significant meaning to their people. It may be a good time for us to learn more about the Himba people and to observe their lifestyle, traditions, and beliefs with a different perspective. In studying them, we can help keep the Himba traditions alive for generations to come.