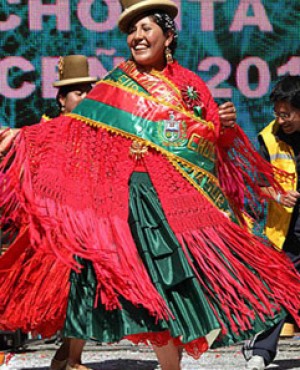 Berkeley – In this day and age, with the wide diffusion of North American fashion, very few cultures remain that are readily identifiable by their dress alone. And while the appearance of a burqa or an Inuit anorak may provide an onlooker with a general sense of the region in question, few traditional outfits are as indicative of place as the garb of Bolivian’s highland cholita. What makes the cholita’s (indigenous woman in traditional dress) attire so distinctive is its incongruous mix of Andean cultural pieces with unmistakable European elements from varying centuries.

The primary elements of a typical cholita’s outfit are the pollera (a multi-layered skirt), a shawl, and the most recognizable piece, her hat. And not just any hat, but most notably, a bowler hat. Each of these elements hearkens back to a distinct era, and only the indigenous Quechua and Aymara women of Bolivia (and, with some variation, the neighboring highland cultures of Peru and Chile) piece them together in such a characteristic way.

The pollera originated centuries ago during the period of Spanish colonization. In an effort to assimilate their new subjects into Spanish culture, colonial authorities required the native inhabitants to dress in peasant attire common at that time in Spain. By adopting for their skirts the bright colors evocative of their pre-colonial past, cholita’s were able to reclaim some of their indigenous culture, making the pollera distinctively Andean.

The shawl, called a manta, is perhaps the most indigenous element of a cholita’s wardrobe. It is typically made of alpaca or llama wool, woven in bright, geometric patterns. A common accessory, the aguayo, usually accompanies the shawl across a Bolivian woman’s shoulders. The aguayo is a multifunctional sling, woven like the manta, in bright traditional patterns. It is used for carrying most anything on one’s back – packages, produce, drink, and especially babies. These textiles are woven using techniques that are centuries old. However, nowadays manufactured versions made of synthetic fibers are increasingly available.

Despite the historical roots of the pollera, manta and aguayo, the most identifiable part of the Bolivian cholita’s dress is her hat, particularly the bombin. The bombin is more commonly known to English speakers as the bowler hat, or derby, and is the very same hat that was considered indispensable by British bankers until just a few decades ago. Given the hat’s nineteenth-century European provenance it stands out as both a fashion anachronism and regional anomaly. Yet it is this conspicuous adornment that, for most people, fixes this eclectic attire to Bolivia.

Hats are very important features in traditional Bolivian dress. No outfit is complete without one. And while the most common topper in Bolivia’s populous highland areas is the bombin, other, equally alien hats are common in other areas – particularly the Abe Lincoln-style stovepipe hat, and the Stetson of the North American cowboy. And while these types of headwear went out of common usage long ago in the United States and Europe, they are far from being considered artifacts among cholita’s. Fashion trends continue to change from year-to-year, as variations in brim width and shape, for example, attract or repel discriminating shoppers.

There are very good practical reasons why hats should remain such an important part of fashion in the high places of Bolivia. In the treeless, mountain communities they provide invaluable protection from the sun’s powerful rays in the thin, high-altitude air. As car culture made sheltered travel convenient for many Western cultures, hats are still a necessity in this, the poorest of South American countries, where many still ride sharing truck bed space in the open air. However, these considerations seem less relevant when one considers the delicacy with which the bombin is worn. The derby is perched high on the head, often sported at a jaunty angle, and fastened with bobby pins. The fashionable, undersized hats don’t provide much covering from the sun. Nor does the felt of which they’re made offer much durable protection from water. And, as is generally the case with traditional Bolivian garb, these distinctive hats are worn only by women. While the importance of headwear undoubtedly sprung originally from necessity, the cholita’s hats are now much more affectation than utilitarian head covering.

But if the headgear is less utile as protective covering, it does serve another function – that of indicating what region of the country the wearer is from. While the bombin is the most common hat for cholitas in and around La Paz, hat styles vary in other localities. Women in Cochambamba, for example, favor taller hats in rectangular shapes, while those of Tarija prefer hats with wider, curving brims. In fact, to a certain degree, each aspect of typical cholita dress varies with regard to region, owing, in part to the climatic variety of Bolivia.

Nonetheless, the bombin, the British banker’s bowler, remains the most iconic of cholita headpieces. What, then, explains the origin of the Bolivian bowler? Its adoption by local women dates back to the 1920s, apparently influenced by the hat’s popularity among British railway workers who were present in the country at that time. One explanation is that a shipment of bowlers arrived in Bolivia and was found to be too small for its intended market, British laborers. The bowlers were instead peddled to the indigenous population. Another theory holds that a shipment of bowlers ended up in Bolivia entirely by mistake and an imaginative local vendor successfully peddled them to Bolivian women as a guarantee against infertility. However it came to be planted so intractably on the Bolivian brow, the bombin has become an inseparable part of a style of dress as distinct and identifiable as that of any culture in the world.