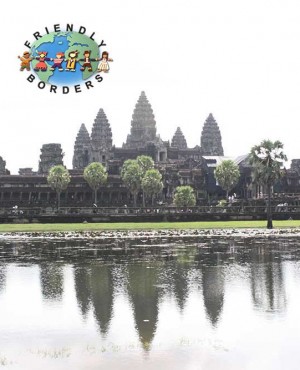 Phnom Penh – Centuries passed, and history is left etched on the ruins found in the Angkor region. These ruins have now become a world-famous destination. What stories are behind these massive monuments? Who are the people who built and lived within these intricate walls?

To understand, we first look at the country where the ruins lie. Present-day Cambodia got its name from the term Kambuja. Cambodia (English) and Cambodge (French) are western transliterations of the said term.

Kambuja is a Sanskrit name used by the ancient kingdoms in this Southeast Asian region. The name was associated closely with Kambu Svayammbhuna, the legendary founder of the Khmer civilization. This relation emphasizes how early tribes from northern India are said to have overseen parts of Southeast Asia.

Aside from Kambuja, there were other names for Cambodia throughout the decades. For instance, from 1975 to 1989, the country was called Kampuchea, which is also from the Sanskrit kambujadeśa (or Kambuja).

During the Angkorean period, which was between the 9th and 15th centuries, the land of Cambodia stretched far and wide that it was between the South China Sea and the Andaman Sea. At that time, the Khmer Empire included the land where present-day Laos, Thailand, and Vietnam are located.

The land and its rich natural resources remained within the bounds of the country. In present-day Cambodia, one can experience a tropical climate all year round. The dry season, which brings frequent droughts, lasts for six months. By contrast, the monsoon season brings intense rain the rest of the year.

Jungle-cloaked mountains are present across Cambodia, which provide shade from the sun, shelter from the rain, and protection from flooding.

Despite the different challenges and changes in the Khmer ethnic community, the people still live in a fairly homogeneous state. The native people are connected by their culture, traditions, language, and beliefs. Even with various regional dialects, they are all intelligible to the Khmer people.

In modern-day society, the Khmer ethnicity is tied closely to their religious practices and beliefs. Theravada Buddhism has been the state religion since the 13th century. With 90% of the Cambodian population belonging to the Khmer ethnic group, the Khmer people’s indigenous ancestor-spirit worship, shamanism, and animism are all inevitably intertwined in their Buddhist practices.

The people’s Khmer language has been written since the seventh century. It was made through the use of a script from South India and was so widespread that artifacts have been found in various regions of southern Vietnam and Thailand. The language of the ancient Khmer empire is termed Old Khmer, which served as the basis of the modern Khmer language that the Cambodian people use today.