Home / News / More than a Woman’s Kingdom: The Mosuo People

More than a Woman’s Kingdom: The Mosuo People 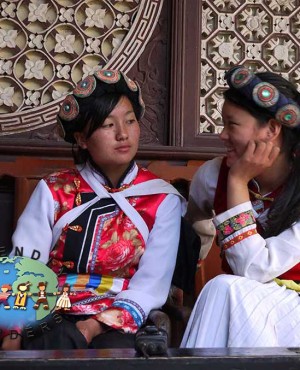 Beijing – Numerous indigenous groups around the globe have rich and colorful ethnic histories, cultures, and societies. Most of these traditional communities, however, are patriarchal; that is, dominated and lead by men. Few indigenous groups pique researchers’ collective interest as those who thrive in a matriarchal society. One such indigenous group is the Mosuo people of China.

The Mosuo ethnic group is one of the few active indigenous communities that follow the maternal bloodline. The Mosuo women are the heads of the families and are thus significant in society. It is no surprise that many researchers and indigenous observers outside of the local region and the country want to learn more about the Mosuo society.

Who Are the Mosuo People?

The Mosuo people of China live along the edge of Lugu Lake in the foothills of the Himalayas. The Mosuo culture has survived through the leadership of the women in each family. The group may be an ethnic minority in the country; however, they attract various researchers and tourists due to their unique society.

The Mosuo women are responsible for passing down their cultural traditions, values, beliefs, and even wealth to the younger generations. Nonetheless, the Mosuo men also have important rules in society. They are often away from their villages, participating in horse and tea caravans. They are also responsible for house building, fishing, and slaughtering livestock.

Perhaps the most prominent tradition of the Mosuo people is what is known as “walking marriage.” It is also referred to in the Mosuo language as tisese, which literally means “to walk back and forth.” The idea behind this practice is that women and men can have multiple partners and be in non-exclusive relationships. A man can visit a woman for any length of time—a night, a week, a month, a lifetime—and then go home to his own house. However, this arrangement is beyond mere physical attraction. The core of the Mosuo relationship is based on mutual respect and agency. When both the man and the woman decide that a partnership is not for life, they are both free to begin new relationships with others.

More than being a matrilineal society, the Mosuo culture also features a distinctive housing layout and unique celebrations of various life events, most notably their coming of age ceremony.

The Mosuo home has certain elements that are present even in separate communities. Such key elements are connected to the Mosuo social structure and religious beliefs. The Mosuo people build their houses with their main deities in mind. These two deities are Reggala (deity of the home) and Daggala (deity of the earth). In addition to the two, the Mosuo people also consider other deities and their ancestors that are at each corner of their houses.

The Mosuo ethnic group also has the coming of age ceremony known as Ta-gie for the boys and Li-gie for the girls. This celebration happens in the child’s 13th year. The child stands in front of his or her parents and receives the set of clothing that new adults wear for the first time. Then, a chant is made before guests give their gifts to the child.

As colorful and exceptional as the Mosuo culture is to the rest of the world, the Mosuo people face a new struggle. The curious gazes of the outside world to their society have also left them open to outside influences. This situation is a concern of the older Mosuo women. Their responsibilities to keep their people’s traditions, culture, and beliefs are becoming more challenging as their practices slowly decline over time while the people become more familiar with the majority Han language and practices.

However, there is still hope for the continuation and survival of the Mosuo ethnic group and their culture. Various organizations conduct projects that support the preservation of ethnic communities around the globe. With their help, the Mosuo elders have a chance to entice the younger members of their community to go back and continue the legacy of their ancestors. It may take a while, but the elders are hopeful that keeping the indigenous community’s ethnic tradition, culture, and beliefs alive is possible.