More Than Just a Christmas Tradition 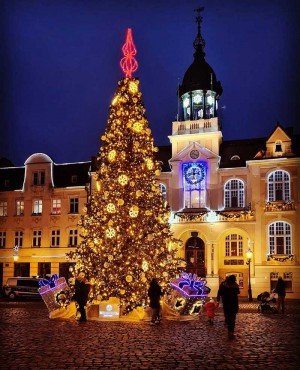 Harrisburg, Pa. – In the 17th to 18th centuries, German and Swiss immigrants arrived in the United States. Here, they began building their communities.

Most of the people and their families settled in the southeastern and south-central regions of Pennsylvania. These settlements became home to people of various cultural and religious backgrounds. These groups include the Amish, German Reformed, Mennonite-Lutheran, Moravian, and many others.

As mentioned earlier, there have been several groups of immigrants to Pennsylvania. These groups began settling in the area in 1683 until around 1815–1820, during the close of the Napoleonic wars. They brought with them a colorful set of cultural traditions, and as the communities began to grow, a distinct linguistic practice began to emerge.

The members of these communities cherish their families and their homes and regard them highly. Their home and church served as centers of culture. By giving importance to these, people are able to create and present a sense of belonging.

Moreover, their religious affiliations introduced different Christmas traditions that are still present today. These practices include the tradition of having a Christmas tree, celebrating Second Christmas, and even the Belsnickeling. All these bring life to the celebration of the Pennsylvania Dutch’s holiday, not excluding or forgetting about the other delicious treats and dishes that come with this kind of holiday.

The Pennsylvania Dutch is known now as the language derived from the German speakers of the colonial times. Its structure represents a variation on the original German language and English. This language is also identified as Pennsilfaanisch–Deitsch. As many different groups of people used Pennsylvania Dutch, there are various textual references where the native speakers wrote both prose and poetry.

Today, many ethnic speakers have settled in using German and English to meet their daily communication needs. Thus, not many of them know how to read or write using Pennsylvania Dutch. Nonetheless, there are continuous efforts by various organizations to help preserve people’s native language.

To better understand the Pennsylvania Dutch’s lives, it is also important to note that the immigrants’ initial settlements may have concentrated in and around Lancaster County of Pennsylvania, but others moved to different states as well. Now, there are ethnic Pennsylvania Dutch living in the Carolinas, Illinois, Indiana, Maryland, Ohio, Virginia, West Virginia, and many other states.

The communities may be in a few different states, but each one keeps the core values of family and church at heart. The people’s continuous growth as a community is also evident in how they enjoy their customs and traditions, from traditional Pennsylvania Dutch food heritage and their traditional crafts to their efforts to promote the Pennsylvania Dutch language and culture.

It may take some time to fully engage the present-day native members as they are more exposed to English in everyday conversations. Still, there is hope in the acts of both native speakers and non-native speakers who wish to keep the indigenous identity alive, starting from reintroducing the native language to modern settings and conversations.