Home / News / The Belief of Arat Sabulungan of Mentawai

The Belief of Arat Sabulungan of Mentawai 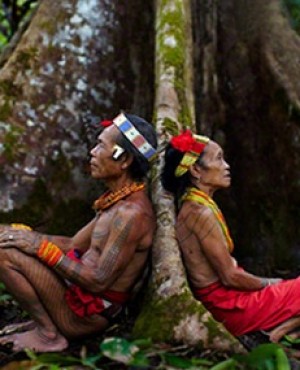 Padang – Many claim that West Sumatra is exclusively inhabited by Minangkabau. Around 120 km off the western coast of West Sumatera lies a series of picturesque and exotic islands of white beaches well-known as the Mentawai islands, inhabited by 92.021 indigenous people of Mentawai. Although the islands are geographically and administratively part of the province of West Sumatera, Mentawai is culturally and spiritually distinctive from those on the mainland, which are mostly matrilineal and Islamic. Mentawaians are patrilineal and though many have converted to Christianity or Islam, there are still those who observe Arat Sabulungan as their traditional religion.

Arat Sabulungan can be translated as “religion of leaves.” Arat is translated as “religion,” “belief,” and “custom,” while Sabulungan is derived from two words, namely sa, which means “a collection of” or “a number of,” while bulungan means “leaves.” Thus, Arat Sabulungan literally means “the tradition of a banquet of leaves.” In this belief, leaves are to be a connector between human beings and the Almighty, which they call Ulau Manua. The literal meaning signifies the importance of forest in its name for the significant role of leaves in every ritual.

Arat Sabulungan is a traditional costume and religious system that has been practiced by Mentawaians for centuries that plays significant roles in their daily lives. Arat Sabulungan regulates the relationship between humans and nature, as well as the special inner relationship of humans with the spirits. Their dependence on nature is reflected in how Mentawaians regard their environment. According to the arat, nature provides all human needs when it is properly treated. However, anyone who violates the rules destroys the harmony of the relationship between nature and humans. Thus, the attitude of the arat toward nature is controlled by abstinence which has been commonly shared and agreed upon by the community.

In Arat Sabulungan, the Mentawaian recognizes and differentiates spirits as Tai, soul as simagre, and power as bajau. Believing that all living and non-living things have their own spirits means that this belief can be categorized as animism. Natural phenomena such as storms, thunder, rain, and rainbows are considered to have spirits. They recognize taikaleleu as those who guard the forest, taikamanua as spirits who maintain the sky and be responsible for weather, taikabaga as those who take care of the earth (land) and be responsible for the fertility of the soil, taikanoinan as spirits who maintain the rivers. Tai in the Mentawaian language signifies the plural form.

Aside from believing in spirits (tai), the Mentawaian acknowledge the existence of sanitu, spirits who live on big shade trees. According to Mentawaian, these spirits are wicked and cruel, and yet they have the most significant role in the Mentawaians’ lives. Angering the sanitu results in incurable diseases and misfortune for a person or an uma (Mentawaian communal longhouse). From stories passed from one generation to the next, the ancestors of the Mentawai people reached a consensus that half of the population should go into another dimension to avoid increasing the population density on the island too much. Half of the population remains human while the other half hide in another dimension and mostly move to the forest. Based on the primordial consensus, humans have to share the space and respect their other-dimension counterparts by performing rituals and obeying any taboos when humans are planning to build a new uma, cut the forest to open new farmland (ladang), or hunt animals in the deep forest. To maintain harmony, some rituals are performed like a party (lia/punen), offerings (buluakenen/panaki), and healing ceremonies (pabetei). The rituals have to be guided by a shaman called sikerei.